Diseases like psoriatic arthritis, rheumatoid arthritis, psoriasis, and ankylosing spondylitis are treated by the drug Adalimumab, which is sold by Abbvie internationally under the trade name Humira.

They have also launched three more bio-similar drugs within the last two months under the trade name Bevaro, Ritucad, and NuPTH, which treats osteoporosis and cancer.

“Amit Ajmera, VP, Cadila Pharmaceuticals, stated that they wanted to provide a solution that’s cost-effective in treating patients with psoriasis and rheumatoid arthritis as there are approximately seven million people suffering from RA and 0.44-2.8 percent people suffering from psoriasis in India. He also stated that though it’s not a life-threatening disease, it can be very painful. Thus, launching Cadalimab will provide these patients with an opportunity to lead a better life.” 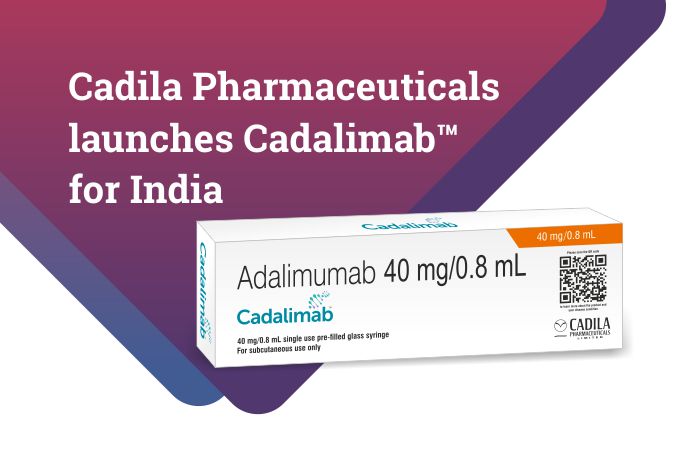 Adalimumab biosimilars that are available in India

Cadila Pharmaceuticals Ltd’s recent innovation, Cadalimab, is an Adalimumab biosimilar which is used for the treatment of psoriatic arthritis, rheumatoid arthritis, psoriasis, and Ankylosing Spondylitis. Adalimumab is a monoclonal antibody and a disease-modifying anti-rheumatic drug that helps render tumor necrosis factor-alpha (TNFα) inactive. It’s also recommended for the treatment of various other diseases. Adalimumab is a well-known drug under the trade name Humira by Abbvie.

In January 2018, the launch of the product Mabura (a similar biologic’ of Adalimumab) was announced by Hetero Group (Hetero), an India-based generic makers, making it is Hetero’s fourth similar biologic to be launched in India.

According to Zydus Cadila, not only is their “similar biologic,” Exemptia, a clone of the originator in regards to purity, potency, and safety of the product but also is the world’s first company to roll out a biosimilar of Adalimumab.

Please note: Don't take the medicine without medical advice and your doctor recommendation.'GenericHope.com' is not a company or online pharmacy, it is simply a blog or a medium that intended to offer free common informamtion to people about benifits of Indian generic medicine. Any medicine information provided on this website is for informational purposes only and does not guarantee its accuracy. Most of the medical information involved in this site is collected on the Internet, only for learning and communication use. However, the information produced here is best of my knowledge and research and i have tried my best to make it as accurate and up-to-date as possible, but i would like to request that it should not be treated as a doctor recommendation or substitute for professional advice, diagnosis or treatment. It is not a substitute for specific or medical advice. Do not disregard your doctors proofessional medical advice in seeking it because of something you have read on this website. Please consult with your physician for any and all medical treatment and medical care. We only express opinions and provide information based on our knowledge & faith. All the Trademarks, Copyright, Brands, that appear on this website belong to their respective brand owner.